Rhea Harmsen’s novel INTERMARRY will be FREE on Amazon for 5 days starting Dec. 22, 2013 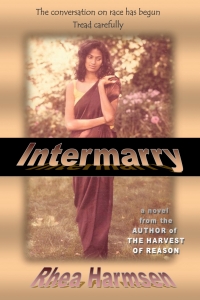 Rhea  Harmsen’s new novel, premiered in november 2013 and is now entering a Free e-book promotion. From Dec 22, 2013 to Dec 26, 2013 readers can download the book from this site on Amazon.com. Happy reading!

Rhea Harmsen is a scientist, novelist and author of Language of the Spirit, a volume of selected poems. She has also released three novels, The Harvest of Reason, Intermarry, and God Created Women. Harmsen was born in a family with a black father and a white mother at a time when interracial marriage was still illegal in some states. Her parents gave her a vision of world citizenship that informs her writing and her lifestyle and has caused her to reject traditional views of race and gender. Harmsen's article "Science in the Hands of Women: Present Barriers, Future Promise" appeared in World Order in 1998 and provides the foundation for the story line for her novel The Harvest of Reason. She co-published the Monroeville Race Unity Forum Bulletin and authored many poems on racial topics, crystallizing the "conversation on race" in the novel Intermarry. Her work with domestic violence survivors in Puerto Rico inspired the novel God Created Women. Harmsen holds a doctorate in Plant Breeding and Plant Genetics from the University of Wisconsin-Madison. She currently resides in Puerto Rico. Upcomming projects are described in her web page at rheaharmsen.com
View all posts by rheaharmsen →
This entry was posted in biracial, chastity, interracial, interracial marriage, multicultural, multiracial, national discussion, poverty, race, race in America, racial mistrust, revitalization, social justice, the poor, unity in diversity, urban renewal, welfare, welfare reform and tagged baha'i, biracial, chastity, feminization of poverty, interracial, interracial marriage, multicultural, multiracial, national discussion, poetry, race, race in america, racial mistrust, revitalization, women. Bookmark the permalink.

1 Response to Rhea Harmsen’s novel INTERMARRY will be FREE on Amazon for 5 days starting Dec. 22, 2013