BOOK LAUNCH AGAIN! GOD CREATED WOMEN, the new release from Rhea Harmsen is the novel that debunks the myth that women were born to suffer 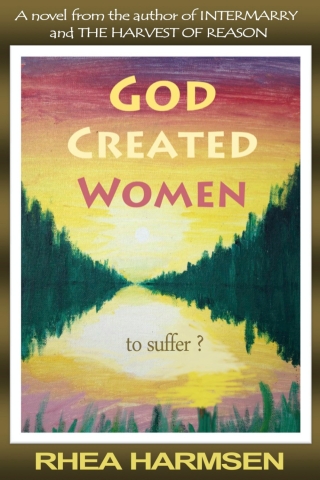 A few weeks ago I asked my readers for help in naming my new novel. This plea went out over wordpress and facebook and many of you responded with truly excellent feedback. So, you might be surprised to find that the final cover, the one which now accompanies the novel, is not one of the four I submitted for your consideration. Truthfully though, your collective input was key in my settling on not only a cover, but also on the title. (Without a title concept it is impossible to have a cover). So, I want to thank everyone who helped. I also want to thank Lua Harmsen, for her beautiful painting, which expresses what I am trying to say in three hundred pages.

It is a new morning in history, (or a  sunset to old ideas) and it is time to explode that myth, perhaps more prevalent in Latin novelas (soaps) than in other forms of popular culture. Really, given all the ways in which women are made to suffer throughout the world, you can say it is a universal myth. (Oh yes, I can quote you the UN/academic statistics on rape, female infanticide, human trafficking, denial of rights and education, battering, exploitation and discrimination. But I won’t).

My little book is about two young people who are trying to escape multi-generational family violence, Joel and Elena. The synopsis on AMAZON.COM reads:

“Elena has all the sweetness and femininity that her money and social position make irresistible. So she’s the jewel every Puerto Rican boy covets to crown his dreams. But her life revolves around a carefully concealed lie and all her goodness cannot save her. She learns early on that only bad girls can keep the devil at bay.

Joel is the heartthrob a girl dreams of meeting on the dance floor and taking home to Mami. He’s got everything going for him and all of it paid for with his own sweat. But he’s also got an ominous past he cannot escape. And he’s not sure if machismo is an outdated concept or the only way to keep his family safe. First there was Maria. Then there was Elena. In between them a string of other victims. Joel saw it all. And he echoed the question, “Have women been born to suffer?”

Both Joel and Elena are fleeing the intoxication of true love, both are feeling the bite of hand-me-down shame. Both are keeping secrets to conceal their rage.
Where is the end to darkness? Where will the dawn come from? If love is not enough, and desire can’t take you there, then only the truth can end the generations of pain.”

I can’t talk about it much more for fear of issuing spoilers, but I hope folks will take a chance and give it a read.

It was my great honor and privilege to be able to launch it on the Day of No More Violence Against Women event (November, 23, 2013) which we have been commemorating in my home town of Cabo Rojo, Puerto Rico, for fourteen years straight. We (the Foundation for the Integral Development of Women) do a march and a show to promote the prevention of domestic violence. Many of the details of this fictional story are the actual experiences of my women co-workers in this organization. 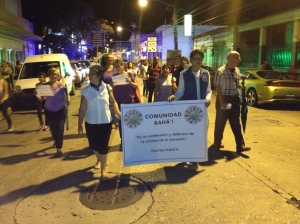 Rhea Harmsen is a scientist, novelist and author of Language of the Spirit, a volume of selected poems. She has also released three novels, The Harvest of Reason, Intermarry, and God Created Women. Harmsen was born in a family with a black father and a white mother at a time when interracial marriage was still illegal in some states. Her parents gave her a vision of world citizenship that informs her writing and her lifestyle and has caused her to reject traditional views of race and gender. Harmsen's article "Science in the Hands of Women: Present Barriers, Future Promise" appeared in World Order in 1998 and provides the foundation for the story line for her novel The Harvest of Reason. She co-published the Monroeville Race Unity Forum Bulletin and authored many poems on racial topics, crystallizing the "conversation on race" in the novel Intermarry. Her work with domestic violence survivors in Puerto Rico inspired the novel God Created Women. Harmsen holds a doctorate in Plant Breeding and Plant Genetics from the University of Wisconsin-Madison. She currently resides in Puerto Rico. Upcomming projects are described in her web page at rheaharmsen.com
View all posts by rheaharmsen →
This entry was posted in child molesters, domestic violence, economic abuse, mother's rights, mothers, national discussion, rights of women, social justice, Uncategorized, violence against women and tagged child molesting, domestic violence, hispanic romance, multicultural romance, Puerto Rico, sexual asault, violence against women. Bookmark the permalink.

1 Response to BOOK LAUNCH AGAIN! GOD CREATED WOMEN, the new release from Rhea Harmsen is the novel that debunks the myth that women were born to suffer